Wireless and Mobile Networking Mahbub Hassan
There has been phenomenal uptake of wireless and mobile networking technologies in the past decades. Significant developments have taken place during this time making the wireless technology more affordable, effective, and reliable. This book explains the fundamental principles and protocols of key existing and emerging wireless networking technologies. The book begins with a review of the fundamentals of wireless communications. It covers the basic theories and terminologies of coding and modulation, which maps digital information to the underlying signal, as well as the models to capture the dynamics of wireless signal propagation in the environment. It provides in-depth coverage of the WiFi evolution covering both the mainstream WiFi, which operates in 4/5GHz with new versions targeting 6GHz, as well as some of the niche WiFi standards that operate outside the mainstream bands such as 8011af in 700MHz TV bands, 8011ah in 900MHz to connect the Internet of Things (IoT), and 8011ad/ay in 60GHz to support multi-gigabit applications. The book covers the fundamental concepts of cellular networks, examines the advancements brought forth by each generation, and discusses new applications and the underpinning wireless technologies promised by 5G. It also covers a recently developed long-range low-power wireless networking technology called LoRa, which is the fastest growing technology to connect millions of IoT sensors and devices throughout the world. The concluding chapters examine emerging wireless paradigms such as Artificial Intelligence for wireless networking, sensing with wireless signals, and mobile networking with flying base stations carried by drones and unmanned aerial vehicles (UAVs). With many worked-out examples, illustrative figures, and multiple choice questions, this book is an ideal for students and a valuable reference for anyone working in this rapidly evolving field. Categories:
Computers – Networking
Year:
2022
Edition:
1
Publisher:
CRC Press
Language:
english
Pages:
274 / 282
ISBN 10:
0367487357
ISBN 13:
9780367487355
File:
57 MB 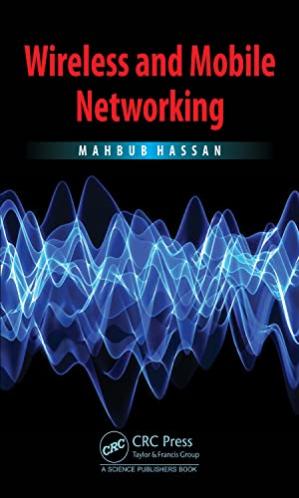