Windows Terminal Tips, Tricks, and Productivity Hacks: Optimize your command-line usage and development processes with these pro-level techniques Will Fuqua
Become an efficient command-line expert by harnessing the power of the new Microsoft Windows Terminal, and learn time-saving tricks for PowerShell, WSL2, and moreKey FeaturesCustomize and optimize your Windows Terminal and its shellsWork effectively on the command line with split panes, hotkeys, and automationUse PowerShell and WSL2 efficiently to build, test, and deploy applicationsBook DescriptionWindows Terminal is a new and open-source command-line application for Windows 10, built for the Command Prompt, PowerShell, Windows Subsystem for Linux, and more. It’s fast, modern, and configurable thanks to its GPU-accelerated rendering, excellent UTF-8 support, and JSON-based configurability, and this book can help you learn how to leverage these features.You’ll start by learning the benefits of Windows Terminal and its open-source development, as well as how to use the built-in tabs, panes, and key bindings to build your own efficient terminal workflows. After you’ve mastered Windows Terminal, this book shows how to use and configure PowerShell Core and the Windows Subsystem for Linux within Windows Terminal. You’ll maximize your productivity using powerful tools such as PSReadLine for PowerShell and ZSH on Linux, and discover useful tips and tricks for common developer tools like Git and SSH. Finally, you’ll see how Windows Terminal can be used in common development and DevOps tasks, such as developing frontend JavaScript applications and backend REST APIs, and managing cloud-based systems like Amazon Web Services (AWS), Microsoft Azure, and Google Cloud.By the end of this book, you’ll not only be well-versed with Windows Terminal, but also have learned how to effectively use shells like PowerShell Core and ZSH to become proficient at the command line.What you will learnInstall, update, and use Windows Terminal and its preview versionCustomize your Windows Terminal to be both visually appealing and functionalEnable and effectively use the latest versions of PowerShell Core and Windows Subsystem for LinuxInstall and configure time-saving tools for the command lineWork efficiently with common developer tools such as Git and SSHBuild, deploy, and manage apps in the cloud using Windows TerminalUse Linux tools from Windows with easeWho This Book Is ForThis book is for developers, DevOps professionals, and sysadmins who want to become advanced command-line power users. Whether you’re new to the command line or you already use Windows PowerShell every day, this book will have something for you. Categories:
Computers – Networking
Year:
2021
Publisher:
Packt Publishing – books Account
Language:
english
Pages:
227 / 254
ISBN 10:
1800207565
ISBN 13:
9781800207561
File:
136 MB 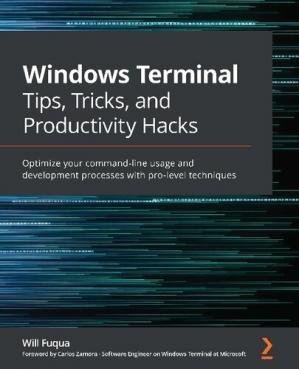