Windows Subsystem for Linux 2 (WSL 2) Tips, Tricks, and Techniques: Maximise productivity of your Windows 10 development machine with custom workflows and configurations Stuart Leeks
A practical handbook that will help you bridge the gap between Windows and Linux to develop apps that leverage the best features across both ecosystems with seamless interoperabilityKey FeaturesConfigure and control WSL to suit your needs and preferencesDiscover tips for working seamlessly between Windows and WSL Linux distrosLearn how to work effectively with containers in WSL, as well as how to containerize your development environments with Visual Studio Code to isolate your dependenciesBook DescriptionWindows Subsystem for Linux (WSL) allows you to run native Linux tools alongside traditional Windows applications. Whether you’re developing applications across multiple operating systems or looking to add more tools to your Windows environment, WSL offers endless possibilities.You’ll start by understanding what WSL is and learn how to install and configure WSL along with different Linux distros. Next, you’ll learn techniques that allow you to work across both Windows and Linux environments. You’ll discover how to install and customize the new Windows Terminal. We’ll also show you how to work with code in WSL using Visual Studio Code (VS Code). In addition to this, you’ll explore how to work with containers with Docker and Kubernetes, and how to containerize a development environment using VS Code.While Microsoft has announced support for GPU and GUI applications in an upcoming release of WSL, at the time of writing these features are either not available or only in early preview releases. This book focuses on the stable, released features of WSL and giving you a solid understanding of the amazing techniques that you can use with WSL today.By the end of this book, you’ll be able to configure WSL and Windows Terminal to suit your preferences, and productively use Visual Studio Code for developing applications with WSL.What you will learnInstall and configure Windows Subsystem for Linux and Linux distrosAccess web applications running in Linux from WindowsInvoke Windows applications, file systems, and environment variables from bash in WSLCustomize the appearance and behavior of the Windows Terminal to suit your preferences and workflowsExplore various tips for enhancing the Visual Studio Code experience with WSLInstall and work with Docker and Kubernetes within Windows Subsystem for LinuxDiscover various productivity tips for working with Command-line tools in WSLWho this book is forThis book is for developers who want to use Linux tools on Windows, including Windows-native programmers looking to ease into a Linux environment based on project requirements or Linux developers who’ve recently switched to Windows. This book is also for web developers working on open source projects with Linux-first tools such as Ruby or Python, or developers looking to switch between containers and development machines for testing apps. Prior programming or development experience and a basic understanding of running tasks in bash, PowerShell, or the Windows Command Prompt will be required.Table of ContentsIntroduction to the Windows Subsystem for LinuxInstalling and Configuring the Windows Subsystem for LinuxGetting Started with Windows TerminalWindows to Linux InteroperabilityLinux to Windows InteroperabilityGetting More from Windows TerminalWorking with Containers in WSLWorking with WSL DistrosVisual Studio Code and WSLVisual Studio Code and ContainersProductivity Tips with Command-Line Tools Categories:
Computers – Operating Systems
Year:
2020
Publisher:
Packt Publishing
Language:
english
Pages:
246
ISBN 10:
1800562446
ISBN 13:
9781800562448
File:
55 MB 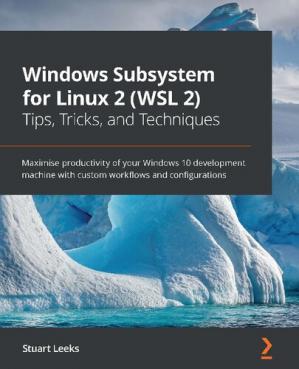