Welcome to Hell on Earth – Artificial Intelligence, Babies, Bitcoin, Cartels, China, Democracy, Diversity, Dysgenics, Equality, Hackers, Human Rights, Islam, Liberalism, Prosperity, The Web michael richard starks
America and the world are in the process of collapse from excessive population growth, most of it for the last century and now all of it due to 3rd world people. Consumption of resources, climate change, and the addition of about 2 billion more ca. 2100 will collapse industrial civilization and bring about starvation, disease, violence and war on a staggering scale. Billions will die and nuclear war is all but certain. In America this is being hugely accelerated by massive immigration and immigrant reproduction, combined with abuses made possible by democracy. Depraved human nature inexorably turns the dream of democracy and diversity into a nightmare of crime and poverty. The root cause of collapse is the inability of our innate psychology to adapt to the modern world, which leads people to treat unrelated persons as though they had common interests. This, plus ignorance of basic biology and psychology, leads to the social engineering delusions of the partially educated who control democratic societies. Few understand that if you help one person you harm someone else-there is no free lunch and every single item anyone consumes destroys the earth beyond repair. Consequently, social policies everywhere are unsustainable and one by one all societies without stringent controls on selfishness will collapse into anarchy or dictatorship. Without dramatic and immediate changes, there is no hope for preventing the collapse of America, or any country that follows a democratic system. Hence my essay “Suicide by Democracy”. It is also now clear that the seven sociopaths who rule China are winning World War 3, and so my concluding essay on them. The only greater threat is Artificial Intelligence which I comment on briefly in the last paragraph.The first group of articles attempt to give some insight into how we behave that is reasonably free of theoretical delusions. In the next three groups I comment on three of the principal delusions preventing a sustainable world- technology, religion and politics (cooperative groups). People believe that society can be saved by them, so I provide some suggestions in the rest of the book as to why this is unlikely via short articles and reviews of recent books by well-known writers. Categories:
Computers – Computer Business & Culture
Year:
2020
Edition:
1
Publisher:
Reality Press
Language:
english
Pages:
377
ISBN 10:
1951440811
ISBN 13:
9781951440817
File:
63 MB 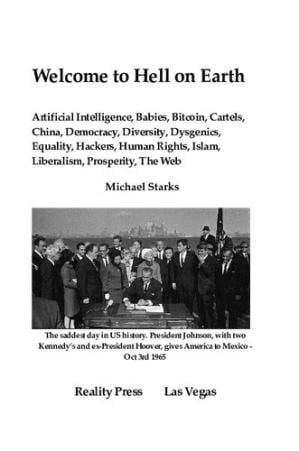