Web Development with Bootstrap 4 and Angular 2

Web Development with Bootstrap 4 and Angular 2 Sergey Akopkokhyants, Stephen Radford
Key FeaturesUpdated for the latest releases of Angular and Bootstrap, this book shows you how to build web applications with cutting-edge web technologiesCombine the best of both worlds to build single page apps with elegant user interfacesBuild, develop, and customize your application using Angular and BootstrapPacked with tips to help you avoid potential stumbling blocks while developingBook DescriptionTwo of the most popular frontend frameworks, Angular and Bootstrap, have undergone a major overhaul to embrace emerging web technologies so that developers can build cutting-edge web applications.Inside this title you’ll dive, fingers first, into the basics of both the tools, and once you’re familiar with them, you’ll move onto Bootstrap’s new grid system and Angular’s built-in directives. You’ll then learn how to format output using Angular’s pipes and how to make use of the built-in router to set up routes for all your components. Webpack will be your buddy to wrap up your project. Then, after throwing in some SASS to make things pretty, you’ll learn how to validate the forms you’ve built and debug your application. Finally, you’ll go on to learn how to obtain smooth transitioning from Bootstrap to Angular and then how to hook up with a server and use Firebase as the persistence layer.Once you’re done with this book, you’ll not only have a lovely little e-commerce application running, but you’ll also take with you the confidence to innovate and build your own applications with ease.What you will learnDevelop Angular 2 single page applications using an ecosystem of helper toolsGet familiar with Bootstrap’s new grid and helper classesEmbrace TypeScript and ECMAScript 2015 to write more maintainable codeUse custom directives for Bootstrap 4 with the ng2-bootstrap libraryUnderstand the component-oriented structure of Angular 2 and its routerMake use of the built-in HTTP library to work with API endpointsUse observables and streams to manage the app’s data and stateCombine Angular 2 and Bootstrap 4 along with Firebase in the development of a solid exampleAbout the AuthorSergey Akopkokhyants is a software architect with more than 20 years of professional experience in designing and developing client and server-side applications. He is also a certified Java developer and project manager. He has general knowledge of many tools, languages, and platforms.For the last decade, Sergey has been responsible for customizing and producing weboriented applications for wholesale business management solutions projects for several worldwide mobile communication companies. His responsibilities have included: architecture design and guidance of client software development using Flex, CSS, HTML, JavaScript, TypeScript, and Dart, and client-server integration with Java. He is also the founder and an active contributor to several open source projects on GitHub.Sergey is passionate about web design and development and likes sharing his expertise with others, helping them to increase their skills and productivity. He is author of the book Mastering Dart and also he was one of reviewers of the books Learning Dart and Dart Cookbook.Stephen Radford is a full-stack web and app developer based in the heart of England–Leicester. Originally from Bristol, Stephen moved to Leicester after studying Graphic Design at college to accept a job at one of the UK’s largest online marketing companies.Whilst working at a number of agencies, Stephen developed several side projects, including FTPloy, a SaaS designed to make continuous deployment available to everyone. The project was subsequently a finalist in the .NET Awards Side Project of the Year category.He and his business partner now run Cocoon, a web development company that builds and maintains web and mobile apps. Cocoon also works closely with a handful of startups and businesses to develop ideas into websites and apps.Table of ContentsSaying Hello!Working with Bootstrap ComponentsAdvanced Bootstrap Components and CustomizationCreating the TemplateRoutingDependency InjectionWorking with FormsAdvanced ComponentsCommunication and Data PersistenceAdvanced Angular Techniques Categories:
Computers – Web Development
Year:
2016
Edition:
2nd
Publisher:
Packt Publishing
Language:
english
Pages:
404 / 397
ISBN 10:
1785880810
ISBN 13:
9781785880810
File:
40 MB 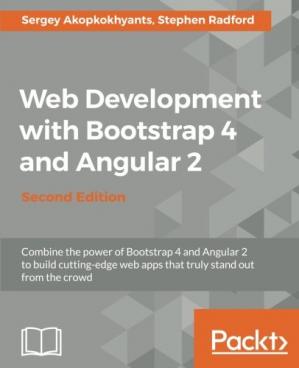