Wave 4: Network Marketing in the 21st Century Richard Poe
Ride the Wave into the 21st Century!
In the ground-breaking Wave 3, Richard Poe revealed how the new world of computers has liberated network marketing from its humble beginnings to offer an unprecedented professional opportunity for financial freedom. Now, in Wave 4, Poe shows how the marriage between the Internet and people-to-people sales will accelerate the growth of network marketing.
Poe predicts that this new technology-driven wave will sweep up in its wake millions of people who have never before considered network marketing. In addition, he explains how the Internet, coupled with the touch of good old-fashioned personal attention, will revolutionize direct selling, as the demand for new products and services explodes beyond borders.
We live in exciting times. Millions of people around the world are dreaming of starting up their own businesses. Wave 4 shows them how network marketing can help them achieve exciting financial goals in the 21st century!
“A splendid read, not only for network marketers, but for anyone wishing to thrive in the home-based economy of the 21st century. Richard Poe cuts through the hype, with insight and objectivity, presenting an unusually clear-headed view of this exciting new business frontier.”—Dr. Stephen R. Covey, author of The 7 Habits of Highly Effective People
” Wave 4 is a tidal wave, carrying new millennium surfers into rich ports of call.”—Dr. Denis Waitley, author of The Psychology of Winning for the 21st Century
Categories:
Business & Economics – Sales & Marketing
Year:
1999
Edition:
1
Publisher:
Three Rivers Press
Language:
english
Pages:
303
ISBN 10:
0761517529
ISBN 13:
9780761517528
File:
40.24 MB 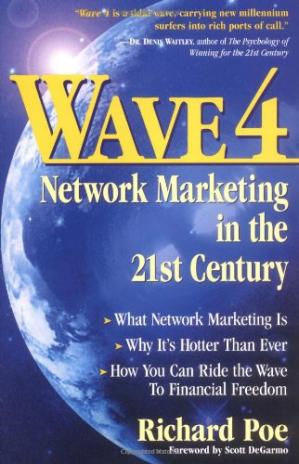