Visions of Heaven: The Dome in European Architecture

Visions of Heaven: The Dome in European Architecture Victoria Hammond, David Stephenson, Keith F. Davis
There’s an ethereal magic to standing beneath a dome, neck craned, looking up at a vision of the heavens created by some long-ago figure of genius. From the Pantheon to the Hagia Sophia, the power of the dome seems transcendent. Photographer David Stephenson’s magnificently kaleidoscopic images of dome interiors capture this evanescent drama, and make Visions of Heaven one of the most spectacularly beautiful books we’ve ever produced. Traveling from Italy to Spain, Turkey, England, Germany, and Russia, among other countries, and photographing churches, palaces, mosques, and synagogues from the second to the early twentieth century, Stephenson’s work amounts to a veritable typology of the cupola. His images present complex geometrical structures, rich stucco decorations, and elaborate paintings as they have never been seen before. Brilliantly calibrated exposures reveal details and colors that would otherwise remain hidden in these dimly lit spaces. Visions of Heaven shows more than 120 images, including the Roman Pantheon, the Byzantine churches of Turkey, the great domes of the Renaissance, the decorative cupolas of the Baroque and the Rococo ages, and a nineteenth-century synagogue in Hungary.
Categories:
Arts – Architecture
Year:
2005
Edition:
1
Publisher:
Princeton Architectural Press
Language:
english
Pages:
171
ISBN 10:
1568985495
ISBN 13:
9781568985497
File:
355 MB 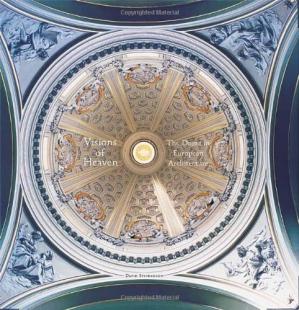 Visions of Heaven: The Dome in European Architecture
$15.99