Visibility Algorithms in the Plane

Visibility Algorithms in the Plane Ghosh S.K.
A human observer can effortlessly identify visible portions of geometric objects present in the environment. However, such computations of visible portions of objects from a viewpoint involving thousands of objects is a time-consuming task even for high-speed computers. To solve such visibility problems, efficient algorithms have been designed in computational geometry over the last three decades. This book presents some of these visibility algorithms in two dimensions. Specifically, basic algorithms for point visibility, weak visibility, shortest paths, visibility graphs, link paths and visibility queries are all discussed. Several geometric properties are also established through lemmas and theorems.With over 300 figures and hundreds of exercises, this book is ideal for graduate students and researchers in the field of computational geometry. It will also be useful as a reference for researchers working in algorithms, robotics, computer graphics and geometric graph theory. Readers need only a background in algorithms and data structures for understanding this book, and some algorithms from the book can be used in a first course in computational geometry. Categories:
Computers – Algorithms and Data Structures
Year:
2007
Language:
english
Pages:
334
ISBN 10:
0511286260
ISBN 13:
9780511286261
File:
61 MB 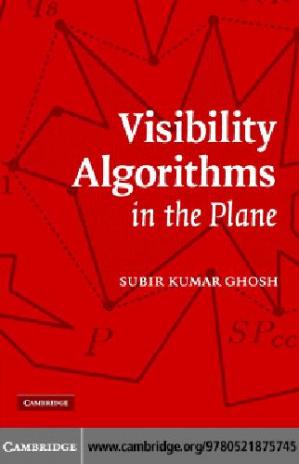 Visibility Algorithms in the Plane
$15.99