Virtual and Augmented Reality for Dummies

Virtual & Augmented Reality for Dummies Paul Mealy
An easy-to-understand primer on Virtual Reality and Augmented Reality
Virtual Reality (VR) and Augmented Reality (AR) are driving the next technological revolution. If you want to get in on the action, this book helps you understand what these technologies are, their history, how they’re being used, and how they’ll affect consumers both personally and professionally in the very near future.
With VR and AR poised to become mainstream within the next few years, an accessible book to bring users up to speed on the subject is sorely needed–and that’s where this handy reference comes in! Rather than focusing on a specific piece of hardware (HTC Vive, Oculus Rift, iOS ARKit) or software (Unity, Unreal Engine),Virtual & Augmented Reality For Dummiesoffers a broad look at both VR and AR, giving you a bird’s eye view of what you can expect as they continue to take the world by storm.
* Keeps you up-to-date on the pulse of this fast-changing technology
* Explores the many ways AR/VR are being used in fields such as healthcare, education, and entertainment
* Includes interviews with designers, developers, and technologists currently working in the fields of VR and AR
Perfect for both potential content creators and content consumers, this book will change the way you approach and contribute to these emerging technologies. Categories:
Computers – PC & Video Games
Year:
2018
Edition:
Paperback
Publisher:
For Dummies
Language:
english
Pages:
352 / 347
ISBN 10:
1119481341
ISBN 13:
9781119481348
File:
456 MB 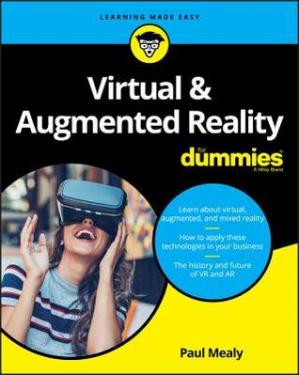 Virtual and Augmented Reality for Dummies
$15.99