Traefik API Gateway for Microservices: With Java and Python Microservices Deployed in Kubernetes Rahul Sharma, Akshay Mathur
Use Traefik as a load balancer or a reverse proxy for microservices-based architecture. This book covers Traefik integration for microservices architecture concerns such as service discovery, telemetry, and resiliency.The book focuses on building an in-depth understanding of Traefik. It starts with the fundamentals of Traefik, including different load balancing algorithms available, and failure handling for application resiliency. Examples are included for the failure scenarios. TLS support is explained, including scenarios of TLS termination and TLS forwarding. Traefik supports TLS termination using Let’s Encrypt. Traefik deployment in prominent microservices ecosystems is discussed, including Docker and Kubernetes.
Traefik is a language-neutral component. This book presents examples of its deployment with Java-based microservices. The examples in the book show Traefik integration with Jaeger/Zipkin, Prometheus, Grafana, and FluentD. Also covered is Traefik for Python-based services and Java-based services deployed in the Kubernetes cluster. By the end of the book, you will confidently know how to deploy and integrate Traefik into prominent microservices ecosystems.
What You Will LearnUnderstand Traefik basics and its componentsExplore different load balancing scenarios and TLS terminationConfigure service discovery, circuit breakers, timeouts, and throttlingMonitor Traefik using Prometheus and request tracing
Who This Book Is ForDevelopers and project managers who have developed microservices and are deploying them in cloud and on-premise environments with Kubernetes or Docker. The book is not specifically written for any particular programming language. The examples presented use Java or Python.
Categories:
Computers – Programming
Year:
2021
Edition:
1st ed.
Publisher:
Apress
Language:
english
Pages:
264
ISBN 10:
1484263766
ISBN 13:
9781484263761
File:
06 MB 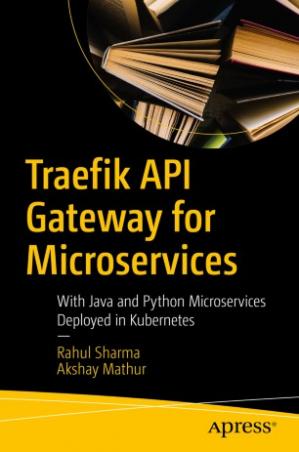