The Theory of Hash Functions and Random Oracles: An Approach to Modern Cryptography Information Security and Cryptography

The Theory of Hash Functions and Random Oracles: An Approach to Modern Cryptography (Information Security and Cryptography) Arno Mittelbach, Marc Fischlin
Hash functions are the cryptographer’s Swiss Army knife. Even though they play an integral part in today’s cryptography, existing textbooks discuss hash functions only in passing and instead often put an emphasis on other primitives like encryption schemes. In this book the authors take a different approach and place hash functions at the center. The result is not only an introduction to the theory of hash functions and the random oracle model but a comprehensive introduction to modern cryptography.After motivating their unique approach, in the first chapter the authors introduce the concepts from computability theory, probability theory, information theory, complexity theory, and information-theoretic security that are required to understand the book content. In Part I they introduce the foundations of hash functions and modern cryptography. They cover a number of schemes, concepts, and proof techniques, including computational security, one-way functions, pseudorandomness and pseudorandom functions, game-based proofs, message authentication codes, encryption schemes, signature schemes, and collision-resistant (hash) functions. In Part II the authors explain the random oracle model, proof techniques used with random oracles, random oracle constructions, and examples of real-world random oracle schemes. They also address the limitations of random oracles and the random oracle controversy, the fact that uninstantiable schemes exist which are provably secure in the random oracle model but which become insecure with any real-world hash function. Finally in Part III the authors focus on constructions of hash functions. This includes a treatment of iterative hash functions and generic attacks against hash functions, constructions of hash functions based on block ciphers and number-theoretic assumptions, a discussion of privately keyed hash functions including a full security proof for HMAC, and a presentation of real-world hash functions.The text is supported with exercises, notes, references, and pointers to further reading, and it is a suitable textbook for undergraduate and graduate students, and researchers of cryptology and information security.
Categories:
Computers – Computer Science
Year:
2021
Edition:
1st ed. 2021 edition
Publisher:
Springer
Language:
english
Pages:
811
ISBN 10:
3030632865
ISBN 13:
9783030632861
File:
94 MB 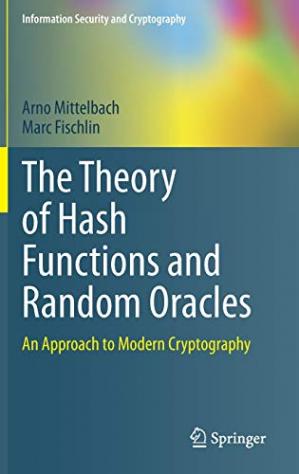 The Theory of Hash Functions and Random Oracles: An Approach to Modern Cryptography Information Security and Cryptography
$15.99