The Synthesis of Artificial Neural Networks using Single String Evolutionary Techniques MacLeod С.
Диссертация, Robert Gordon University, Aberdeen, Scotland, 1999, -275 pp.The research presented in this thesis is concerned with optimising the structure of Artificial Neural Networks. These techniques are based on computer modelling of biological evolution or foetal development. They are known as Evolutionary, Genetic or Embryological methods. Specifically, Embryological techniques are used to grow Artificial Neural Network topologies. The Embryological Algorithm is an alternative to the popular Genetic Algorithm, which is widely used to achieve similar results.
The algorithm grows in the sense that the network structure is added to incrementally and thus changes from a simple form to a more complex form. This is unlike the Genetic Algorithm, which causes the structure of the network to evolve in an unstructured or random way.
The thesis outlines the following original work: The operation of the Embryological Algorithm is described and compared with the Genetic Algorithm. The results of an exhaustive literature search in the subject area are reported. The growth strategies which may be used to evolve Artificial Neural Network structure are listed. These growth strategies are integrated into an algorithm for network growth. Experimental results obtained from using such a system are described and there is a discussion of the applications of the approach. Consideration is given of the advantages and disadvantages of this technique and suggestions are made for future work in the area. A new learning algorithm based on Taguchi methods is also described. The report concludes that the method of incremental growth is a useful and powerful technique for defining neural network structures and is more efficient than its alternatives. Recommendations are also made with regard to the types of network to which this approach is best suited.
Finally, the report contains a discussion of two important aspects of Genetic or Evolutionary techniques related to the above. These are Modular networks (and their synthesis) and the functionality of the network itself.Introduction
The Biological Neural Network
Artificial Neural Networks
Biological Evolution and Embryology
Artificial Evolutionary methods and their application to Neural Networks
Review of previous work on ANNs which grow
Growth strategies for Artificial Neural Networks
Results obtained from application of Growth Strategies
Learning Algorithms
Application to non-specific problems
Applications of Genetically Generated Artificial Neural Networks
Further Work
Conclusions Categories:
Computers – Cybernetics
Language:
english
Pages:
275
ISBN 10:
0780329023
ISBN 13:
9780780329027
File:
852 KB 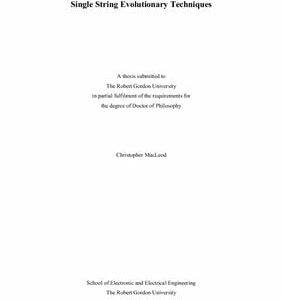