The Sign of the Gallows Susanna Calkins
A dead man at a crossroads. A secret message. A ring with a warning about death . . . Printer’s apprentice Lucy Campion is caught up in a strange and puzzling murder case in this twisty historical mystery set in seventeenth-century London.
London, 166 On her way to a new market to peddle her True Accounts and Strange News, printer’s apprentice Lucy Campion quickly regrets her decision to take the northwestern road. Dark and desolate, the path leads her to the crossroads – and to the old hanging tree. She doesn’t believe in ghosts, but she’s not sure ghosts don’t believe in her.
But before she even reaches the crossroads, she’s knocked off her feet by two men in a hurry. What were they running from? To her dismay, she soon discovers for herself: there, dangling from the tree, is the body of a man.
Did he commit self-murder, or is there something darker afoot? The more Lucy learns, the more determined she is to uncover the truth. But this time, even… 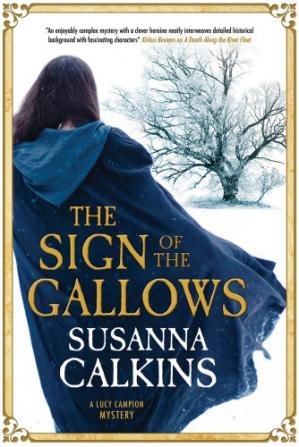