The Making of Black and White

The Making of Black & White James Leach, Christian Bravery
At the end of 1996, the inventor of the god game for once had the ultimate luxury—he could sit back and, in his own time, decide what he wanted to do next. His foresight, his vision and his leadership had led him to great success, riches and enormous respect within the computer games industry. But right now, this bought him freedom. He could spend time thinking about whatever he wanted to. And because his name was Peter Molyneux, what he wanted to think about was games.
During that winter, as 1996 turned into 1997, that’s exactly what he did. Like everyone else in the video games world, he had a hundred ideas, concepts and projects whizzing around his brain. And like everyone else, he knew that one can only give one’s full attention to one thing atone time. But as he mulled over various projects, the same idea kept coming back. It kept haunting him. It was only a concept, but it could be the game he’d wanted to do for years. It was a project he’d nicknamed Black & White. Categories:
Computers – PC & Video Games
Year:
2001
Publisher:
Prima Games
Language:
english
Pages:
96 / 100
ISBN 10:
0761536256
ISBN 13:
9780761536253
File:
102 MB 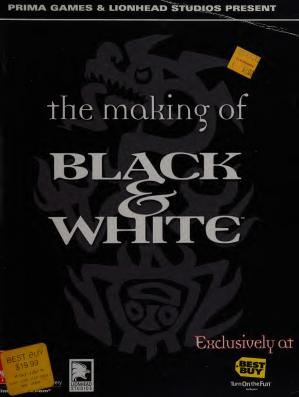