The Gestural Origin of Language (Perspectives on Deafness)

The Gestural Origin of Language (Perspectives on Deafness) David F. Armstrong, Sherman E. Wilcox
In The Gestural Origin of Language, Sherman Wilcox and David Armstrong use evidence from and about sign languages to explore the origins of language as we know it today. According to their model, it is sign, not spoken languages, that is the original mode of human communication. The authors demonstrate that modern language is derived from practical actions and gestures that were increasingly recognized as having the potential to represent, and hence to communicate. In other words, the fundamental ability that allows us to use language is our ability to use pictures or icons, rather than linguistic symbols. Evidence from the human fossil record supports the authors’ claim by showing that we were anatomically able to produce gestures and signs before we were able to speak fluently. Although speech evolved later as a secondary linguistic communication device that eventually replaced sign language as the primary mode of communication, speech has never entirely replaced signs and gestures. As the first comprehensive attempt to trace the origin of grammar to gesture, this volume will be an invaluable resource for students and professionals in psychology, linguistics, and philosophy.
Categories:
Medicine
Year:
2007
Edition:
1
Publisher:
Oxford
Language:
english
Pages:
162
ISBN 10:
0195163486
ISBN 13:
9780195163483
File:
1.79 MB 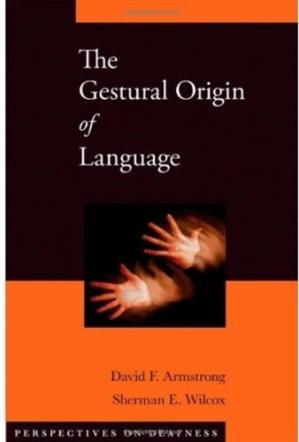 The Gestural Origin of Language (Perspectives on Deafness)
$9.99