The Geometry of Uncertainty: The Geometry of Imprecise Probabilities Fabio Cuzzolin
The principal aim of this book is to introduce to the widest possible audience an original view of belief calculus and uncertainty theory. In this geometric approach to uncertainty, uncertainty measures can be seen as points of a suitably complex geometric space, and manipulated in that space, for example, combined or conditioned. In the chapters in Part I, Theories of Uncertainty, the author offers an extensive recapitulation of the state of the art in the mathematics of uncertainty. This part of the book contains the most comprehensive summary to date of the whole of belief theory, with Chap. 4 outlining for the first time, and in a logical order, all the steps of the reasoning chain associated with modelling uncertainty using belief functions, in an attempt to provide a self-contained manual for the working scientist. In addition, the book proposes in Chap. 5 what is possibly the most detailed compendium available of all theories of uncertainty. Part II, The Geometry of Uncertainty, is the core of this book, as it introduces the author’s own geometric approach to uncertainty theory, starting with the geometry of belief functions: Chap. 7 studies the geometry of the space of belief functions, or belief space, both in terms of a simplex and in terms of its recursive bundle structure; Chap. 8 extends the analysis to Dempster’s rule of combination, introducing the notion of a conditional subspace and outlining a simple geometric construction for Dempster’s sum; Chap. 9 delves into the combinatorial properties of plausibility and commonality functions, as equivalent representations of the evidence carried by a belief function; then Chap. 10 starts extending the applicability of the geometric approach to other uncertainty measures, focusing in particular on possibility measures (consonant belief functions) and the related notion of a consistent belief function. The chapters in Part III, Geometric Interplays, are concerned with the interplay of uncertainty measures of different kinds, and the geometry of their relationship, with a particular focus on the approximation problem. Part IV, Geometric Reasoning, examines the application of the geometric approach to the various elements of the reasoning chain illustrated in Chap. 4, in particular conditioning and decision making. Part V concludes the book by outlining a future, complete statistical theory of random sets, future extensions of the geometric approach, and identifying high-impact applications to climate change, machine learning and artificial intelligence. The book is suitable for researchers in artificial intelligence, statistics, and applied science engaged with theories of uncertainty. The book is supported with the most comprehensive bibliography on belief and uncertainty theory.
Categories:
Computers – Computer Science
Year:
2021
Publisher:
Springer
Language:
english
Pages:
85 864
ISBN 10:
3030631524
ISBN 13:
9783030631529
Series:
Artificial Intelligence: Foundations, Theory, and Algorithms
File:
115 MB 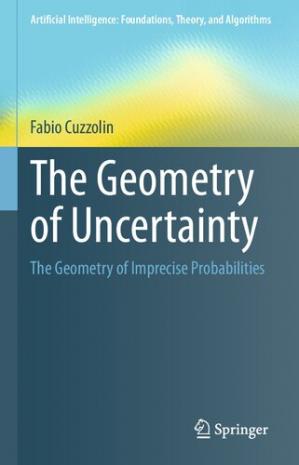