The Continuing Arms Race: Code-Reuse Attacks and Defenses Per Larsen & Ahmad-Reza Sadeghi
Our societies are becoming increasingly dependent on emerging technologies and connected computer systems that are increasingly trusted to store, process, and transmit sensitive data. While generally beneficial, this shift also raises many security and privacy challenges. The growing complexity and connectivity offers adversaries a large attack surface. In particular, the connection to the Internet facilitates remote attacks without the need for physical access to the targeted computing platforms. Attackers exploit security vulnerabilities in modern software with the ultimate goal of taking control over the underlying computing platforms. There are various causes of these vulnerabilities, the foremost being that the majority of software (including operating systems) is written in unsafe programming languages (mainly C and C++) and by developers who are by-and-large not security experts.
Memory errors are a prominent vulnerability class in modern software: they persist for decades and still are used as the entry point for today’s state-of-theart attacks. The canonical example of a memory error is the stack-based buffer overflow vulnerability, where the adversary overflows a local buffer on the stack, and overwrites a function’s return address. While modern defenses protect against this attack strategy, many other avenues for exploitation exist, including those that leverage heap, format string, or integer overflow vulnerabilities.
Given a memory vulnerability in the program, the adversary typically provides a malicious input that exploits this vulnerability to trigger malicious program actions not intended by the benign program. This class of exploits aims to hijack the control flow of the program and differs from conventional malware, which encapsulates the malicious code inside a dedicated executable that needs to be executed on the target system and typically requires no exploitation of a program bug.
As mentioned above, the continued success of these attacks is mainly attributed to the fact that large portions of software programs are implemented in type-unsafe languages (C, C++, or Objective-C) that do not guard against malicious program inputs using bounds checking, automatic memory management, etc. However, even type-safe languages like Java rely on virtual machines and complex runtimes that are in turn implemented in type-unsafe languages out of performance concerns. Unfortunately, as modern applications grow more complex, memory errors and vulnerabilities will likely continue to exist, with no end in sight.
Regardless of the attacker’s method of choice, exploiting a vulnerability and gaining control over an application’s control flow is only the first step of an attack. The second step is to change the behavior of the compromised application to perform malicious actions. Traditionally, this has been realized by injecting malicious code into the application’s address space, and later executing the injected code. However, with the widespread enforcement of data execution prevention (DEP), such attacks are more difficult to launch today. Unfortunately, the long-held assumption that only code injection posed a risk was shattered with the introduction of code-reuse attacks, such as return-into-libc and return-oriented programming (ROP). As the name implies, code-reuse attacks do not require any code injection and instead repurpose benign code already resident in memory.
Code-reuse techniques are applicable to a wide range of computing platforms: x86-based platforms, embedded systems running on an Atmel AVR processor, mobile devices based on ARM, PowerPC-based Cisco routers, and voting machines deploying a z80 processor. Moreover, the powerfulROP technique is Turing-complete, i.e., it allows an attacker to execute arbitrary malicious code.
In fact, the majority of state-of-the-art run-time exploits leverage code-reuse attack techniques, e.g., against Internet Explorer, Apple QuickTime, Adobe Reader, Microsoft Word, or the GnuTLS library. Even large-scale cyberattacks such as the popular Stuxnet worm, which damaged Iranian centrifuge rotors, incorporated code-reuse attack techniques.
Indeed, even after more than three decades, memory corruption exploits remain a clear and present danger to the security of modern software and hardware platforms. This is why the research community both in academia and industry have invested major efforts in the recent past to mitigate the threat. Various defenses have been proposed and even deployed by Google, Microsoft, Intel, etc. The most prominent defenses are based on enforcement (e.g., Control-Flow Integrity [CFI]) or randomization (also known as software diversity) of certain program aspects. Both types of defenses have distinct advantages and disadvantages. Randomization makes it hard for attackers to chain together their attack gadgets, is efficient, and can be applied to complex software such as web browsers. It can have different levels of granularity, from a simple Address Space Layout Randomization (ASLR) to fine-grained randomization at function or even instruction level. However, randomization requires high entropy and all randomization schemes are inherently vulnerable to information leakage. CFI, on the other hand, provides guarantees that the application does not deviate from the intended program flow, yet it requires a security and efficiency tradeoff: i.e., coarse-grained CFI have been shown to be vulnerable, and fine-grained CFI can be inefficient without hardware support. Researchers have been working on improving these schemes with novel ideas in both software and hardware design. Many proposed defenses have been bypassed by other attacks, generating a large body of literature on this topic.
It seems that the arms race between attackers and defenders continues. Although researchers have raised the bar for adversaries, there are still a number of challenges to tackle against sophisticated attacks. Despite all the recent proposals on various defenses, we cannot claim that the problem is entirely solved. However, our community has gained much insight through recent results on how and to what extent we need to employ certain design principles to significantly reduce the effect of code-reuse attacks.
The main purpose of this book is to provide readers with some of the most influential works on run-time exploits and defenses. We hope that this material will inspire readers and generate new ideas and paradigms. Categories:
Computers – Security
Year:
2018
Edition:
1st.
Publisher:
Association for Computing Machinery and Morgan & Claypool Publishers
Language:
english
Pages:
288 / 304
ISBN 10:
197000181X
ISBN 13:
9781970001815
Series:
ACM Books # 18
File:
85 MB 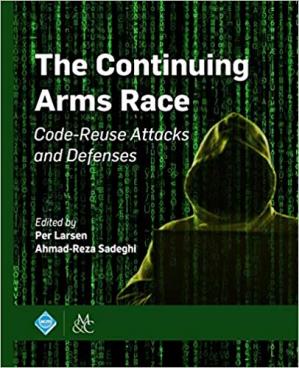