The Computer Boys Take Over: Computers Programmers and the Politics of Technical Expertise History of Computing

The Computer Boys Take Over: Computers, Programmers, and the Politics of Technical Expertise (History of Computing) Nathan L. Ensmenger
This is a book about the computer revolution of the mid-20th century and the people who made it possible.  Unlike most histories of computing, it is not a book about machines, inventors, or entrepreneurs. Instead, it tells the story of the vast but largely anonymous legions of computer specialists—programmers, systems analysts, and other software developers—who transformed the electronic computer from a scientific curiosity into the defining technology of the modern era.  Known alternatively as “whiz kids,” “hackers,” and “gurus,” this new breed of technical specialists were alternately admired for their technical prowess and despised for their eccentric mannerisms and the disruptive potential of the technologies they developed.  As the systems that they built became evermore powerful and ubiquitous, these specialists became the focus of a series of critiques of the social and organizational impact of electronic computing.  To many of their contemporaries, it seemed the “computer boys” were taking over, not just in the corporate setting, but also in government, politics, and society in general.
In The Computer Boys Take Over, Nathan Ensmenger traces the rise to power of the computer expert in modern American society.  He follows the history of computer programming from its origins as low-status, largely feminized labor in the secret wartime computing projects through its reinvention as a glamorous “black art” practiced by “computer cowboys” in the 1950s through its rationalization in the 1960s as the academic discipline of computer science and the software engineering profession. His rich and nuanced portrayal of the men and women (a surprising number of the “computer boys” were, in fact, female) who built their careers around the novel technology of electronic computing explores issues of power, identity, and expertise that have only become more significant to our increasingly computerized society.  His detailed analysis of the pervasive “software crisis” rhetoric of the late 1960s shows how seemingly technical debates about how to manage large-scale software development projects reflected deeper concerns about the growing power and influence of technical specialists in corporate, academic, and governmental organizations.
In his recasting of the drama of the computer revolution through the eyes of its principle revolutionaries, Ensmenger reminds us that the computerization of modern society was not an inevitable process driven by impersonal technological or economic imperatives, but was rather a creative, contentious, and above all, fundamentally human development. Categories:
Computers – Computer Business & Culture
Year:
2010
Publisher:
The MIT Press
Language:
english
Pages:
336 / 331
ISBN 10:
0262050935
ISBN 13:
9780262050937
File:
118 MB 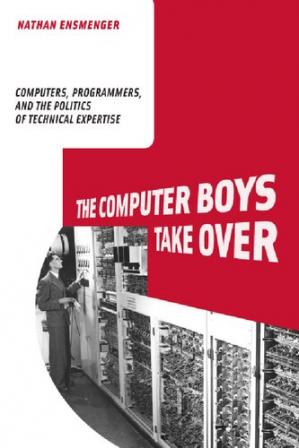 The Computer Boys Take Over: Computers Programmers and the Politics of Technical Expertise History of Computing
$15.99