The Artificial Ear: Cochlear Implants and the Culture of Deafness

The Artificial Ear: Cochlear Implants and the Culture of Deafness Stuart Blume
When it was first developed, the cochlear implant was hailed as a “miracle cure” for deafness. That relatively few deaf adults seemed to want it was puzzling. The technology was then modified for use with deaf children, 90 percent of whom have hearing parents. Then, controversy struck as the Deaf community overwhelmingly protested the use of the device and procedure. For them, the cochlear implant was not viewed in the context of medical progress and advances in the physiology of hearing, but instead represented the historic oppression of deaf people and of sign languages.Part ethnography and part historical study, The Artificial Ear is based on interviews with researchers who were pivotal in the early development and implementation of the new technology. Through an analysis of the scientific and clinical literature, Stuart Blume reconstructs the history of artificial hearing from its conceptual origins in the 1930s, to the first attempt at cochlear implantation in Paris in the 1950s, and to the widespread clinical application of the “bionic ear” since the 1980s.
Categories:
Medicine
Year:
2009
Edition:
1
Language:
english
Pages:
24 241
ISBN 10:
0813546591
ISBN 13:
9780813546599
File:
1.50 MB

Be the first to review “The Artificial Ear: Cochlear Implants and the Culture of Deafness” Cancel reply 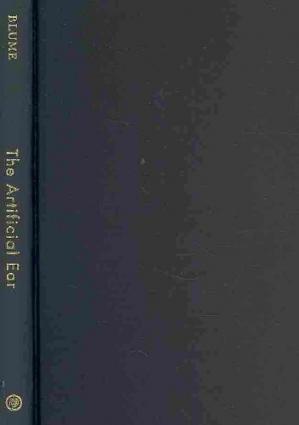 The Artificial Ear: Cochlear Implants and the Culture of Deafness
$9.99