The Art of Deception: Controlling the Human Element of Security

The Art of Deception: Controlling the Human Element of Security Kevin D. Mitnick, William L. Simon
The world’s most infamous hacker offers an insider’s view of the low-tech threats to high-tech security Kevin Mitnick’s exploits as a cyber-desperado and fugitive form one of the most exhaustive FBI manhunts in history and have spawned dozens of articles, books, films, and documentaries. Since his release from federal prison, in 1998, Mitnick has turned his life around and established himself as one of the most sought-after computer security experts worldwide. Now, in The Art of Deception, the world’s most notorious hacker gives new meaning to the old adage, “It takes a thief to catch a thief.” Focusing on the human factors involved with information security, Mitnick explains why all the firewalls and encryption protocols in the world will never be enough to stop a savvy grifter intent on rifling a corporate database or an irate employee determined to crash a system. With the help of many fascinating true stories of successful attacks on business and government, he illustrates just how susceptible even the most locked-down information systems are to a slick con artist impersonating an IRS agent. Narrating from the points of view of both the attacker and the victims, he explains why each attack was so successful and how it could have been prevented in an engaging and highly readable style reminiscent of a true-crime novel. And, perhaps most importantly, Mitnick offers advice for preventing these types of social engineering hacks through security protocols, training programs, and manuals that address the human element of security.Amazon.com Review The Art of Deception is about gaining someone’s trust by lying to them and then abusing that trust for fun and profit. Hackers use the euphemism “social engineering” and hacker-guru Kevin Mitnick examines many example scenarios.After Mitnick’s first dozen examples anyone responsible for organizational security is going to lose the will to live. It’s been said before, but people and security are antithetical. Organizations ex Categories:
Computers – Security
Year:
2003
Edition:
1
Publisher:
Wiley Publishing, Inc.
Language:
english
Pages:
370
ISBN 10:
076454280X
ISBN 13:
9780471237129
File:
1012 KB 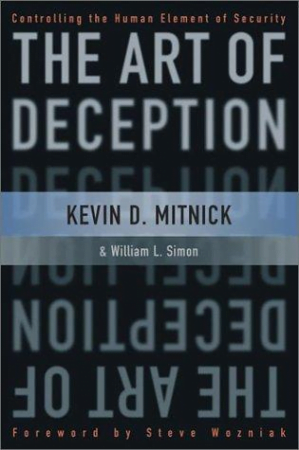 The Art of Deception: Controlling the Human Element of Security
$15.99