Soft Computing and its Applications. Volume 1. A Unified Engineering Concept

Soft Computing and its Applications. Volume A Unified Engineering Concept Ray K.S.
Apple Academic Press / CRC Press, 201 — 627 p.The term ‘soft computing’ means the final result of computation based on imperfect information is tolerant to imprecision, uncertainty and partial truth. The final result of computation, which is usually represented by a fuzzy set, can be flexibly interpreted (depending upon the process of defuzzification) as per the need of the problem at hand. The basic feature ‘tolerance’ is the hallmark of the method of soft computing by which it is different from the existing approach to computing (the so-called hard computing), which is essentially based on the data/information of perfect measurement and whose semantic is either true or false. The topic soft computing has a very soft boundary and is based on several methods of intelligent computation. The basic ingredients of the topic soft computing are fuzzy set, fuzzy logic, rough set, neuro-fuzzy, fuzzy-genetic and many such hybrid approaches. But a very careful inspection of this methodology of soft computing reveals that fuzzy set and fuzzy logic are in the vanguard of technical development of soft computing. Hence the present volume on soft computing, with an aim to introduce the notion of the same, starts with the topic fuzzy set and fuzzy logic and its various approaches in the fields of fuzzy reasoning (approximate reasoning). It is to be noted that a remarkable feature of fuzzy logic is its capability to mimic the human cognitive process of thinking and reasoning, which are essentially the expressions of human perceptions. Thus fuzzy logic becomes an essential tool for commonsense reasoning and computations with perceptions. In addition to fuzzy set, the concept of rough set is also useful to represent the vagueness in the information (data) available to us. Hence the fuzzy rough or rough fuzzy approach to soft computation becomes an important ingredient of soft computing. However in the present volume we restrict ourselves to in-depth study on fuzzy set, fuzzy logic and introduction to rough set. These areas of soft computing technology essentially build up the plinth of the notion of soft computing. Standing on this plinth we promise to move forward through fuzzy reasoning and fuzzy control, which are discussed in a separate volume of this two-volume publication. Thus the basic aim is to study and analyze imprecision, uncertainty and vagueness of our real world is to reveal the mystery of our Nature.
At this juncture we want to convey a message to the readers that the real world is a mixed environment; it is neither completely fuzzy nor completely non fuzzy (crisp). It is a combination of both and change from fuzzy to non-fuzzy and vice versa are very gradual, not at all abrupt. Therefore to describe our universe in a more complete fashion we do not want to make the domain of soft computing a competitor of its counterpart, which is hard computing, as stated above. Rather one should be the complement of other and we strive to have a peaceful co-existence of both methods to describe our real world.
This book on soft computing is highly useful for academics and researchers of different institutions and industries for the applications of soft computing as tools in diverse domains of engineering. This book can also be used as a textbook by undergraduate and post-graduate students of different engineering branches such as Electrical Engineering, Control Engineering, Electronics and Communication Engineering, and Computer Sciences and Information Sciences. Research scholars and professional researchers of different institutions and organizations of different areas such as Control and Robotics, Knowledge Engineering (Database + Artificial Intelligence), Artificial Intelligence, Common Sense Reasoning, Image Processing, Computer Vision (Pattern Classification and Object Recognition) and Web Engineering can utilize the concept of soft computing as an important tool of engineering. This book has a combined flavor of theory and practice and it presents several experimental results on synthetic data and real life data. Thus the book provides a unified platform for applied scientists and engineers.Notion of Soft Computing
Fuzzy Sets, Fuzzy Operators, and Fuzzy Relations
Fuzzy Logic
Fuzzy Implications and Fuzzy If-Then Models
Rough Set Categories:
Computers – Cybernetics
Language:
english
Pages:
627
ISBN 10:
1466578181
ISBN 13:
9781466578180
File:
138 MB 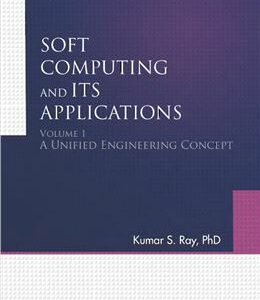 Soft Computing and its Applications. Volume 1. A Unified Engineering Concept
$15.99