Rust for the IoT: Building Internet of Things Apps with Rust and Raspberry Pi

Rust for the IoT: Building Internet of Things Apps with Rust and Raspberry Pi Joseph Faisal Nusairat
Get started programming Rust applications for the Internet of Things (IoT). This book is a programming skills migration book that teaches you the Rust programming techniques most useful for IoT applications. You’ll step through from server to board development in creating a set of IoT applications.In Rust for the IoT, you’ll learn how to build a modern server-side application using Rust on the backend. Then you’ll use docker and Kubernetes to deploy these to a managed cloud. Finally you will use a Raspberry Pi with a SenseHat and Camera to capture the world around you and send that information to the cloud.While you will be able to follow along without any cloud or hardware, to make the most of it we recommend a few cloud pieces and hardware that is designed to integrate with the software in this book. After reading and using this book, you’ll see how to apply Rust to the Internet of Things. What You Will LearnCreate a modern Rust backend complete with handling eventual consistency and interacting via a GraphQL interfaceUse the Raspberry PI to serve as a cheap IoT device that one can easily deploy around the houseCapture temperature, video, and use the interactive joystick to interact with the software you’ve createdUse OpenCV to perform facial detection from the PI’s camera and save that information to the cloud.Create deployable helm charts for the cloud, and for the device create complete ISOs that allow you to easily deploy the Pi’s OS + custom software
Who This Book Is For
You will need to have a basic understanding of cloud application development at a minimum and the basics of Rust coding. This book is for those interested in or working with the IoT and the Raspberry Pi who want to learn how Rust can work for them. Categories:
Computers – Hardware
Year:
2020
Edition:
1st ed.
Publisher:
Apress
Language:
english
Pages:
605
ISBN 10:
1484258606
ISBN 13:
9781484258606
File:
124 MB 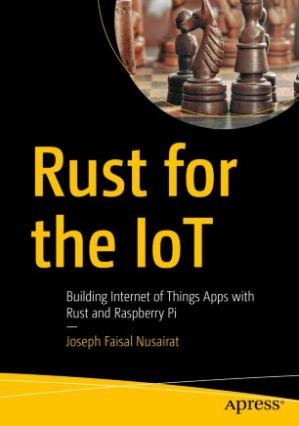 Rust for the IoT: Building Internet of Things Apps with Rust and Raspberry Pi
$15.99