Raspberry Pi IoT Projects: Prototyping Experiments for Makers John C. Shovic
Build your own Internet of Things (IoT) projects for prototyping and proof-of-concept purposes.Updated for the Raspberry Pi 4 and other recent boards, this book contains the tools needed to build a prototype of your design, sense the environment, communicate with the Internet (over the Internet and Machine to Machine communications) and display the results.Raspberry Pi IoT Projects, 2nd Edition provides several IoT projects and designs shown from the start to the finish including an IoT Heartbeat Monitor, an IoT Swarm, IoT Solar Powered Weather Station, an IoT iBeacon Application and a RFID (Radio Frequency Identification) IoT Inventory Tracking System.    The software is presented as reusable libraries, primarily in Python and C with full source code available, making this version a valuable learning resource for classrooms and learning labs.
What You’ll Learn
Create IOT projects with the Raspberry PiTalk to sensors with the Raspberry PiUse iBeacons with the IOT Raspberry PiCommunicate your IOT data to the InternetBuild security into your IOT deviceWho This Book Is ForPrimary audience are those with some technical background, but not necessarily engineers. It will also appeal to technical people wanting to learn about the Raspberry Pi in a project-oriented method.
Categories:
Computers – Hardware
Year:
2021
Edition:
2
Publisher:
Apress
Language:
english
Pages:
30 289
ISBN 10:
1484269101
ISBN 13:
9781484269107
File:
94 MB 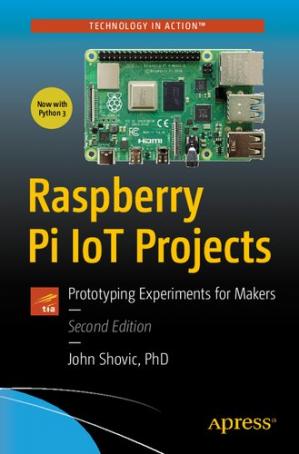