RASPBERRY PI ASSEMBLY LANGUAGE PROGRAMMING: arm processor coding Smith, Stephen
Gain all the skills required to dive into the fundamentals of the Raspberry Pi hardware architecture and how data is stored in the Pi’s memory. This book provides you with working starting points for your own projects while you develop a working knowledge of Assembly language programming on the Raspberry Pi.
You’ll learn how to interface to the Pi’s hardware including accessing the GPIO ports. The book will cover the basics of code optimization as well as how to inter-operate with C and Python code, so you’ll develop enough background to use the official ARM reference documentation for further projects. WithRaspberry Pi Assembly Language Programmingas your guide you’ll study how to read and reverse engineer machine code and then then apply those new skills to study code examples and take control of your Pi’s hardware and software both.
What You’ll Learn
Program basic ARM 32-Bit Assembly Language
Interface with the various hardware devices on the Raspberry Pi
Comprehend code containing Assembly language
Use the official ARM reference documentation
Who This Book Is For
Coders who have already learned to program in a higher-level language like Python, Java, C#, or C and now wish to learn Assembly programming.
Categories:
Computers – Hardware
Year:
2019
Publisher:
Apress
Language:
english
Pages:
374 / 380
ISBN 10:
148425287X
ISBN 13:
9781484252871
File:
06 MB 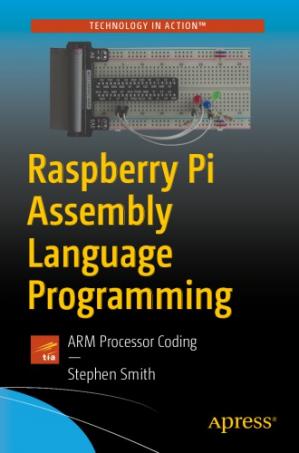