Query Store for SQL Server 2019: Identify and Fix Poorly Performing Queries Tracy Boggiano, Grant Fritchey
Apply the new Query Store feature to identify and fix poorly performing queries in SQL Server.
Query Store is an important and recent feature in SQL Server that provides insight into the details of query execution and how that execution has changed over time. Query Store helps to identify queries that aren’t performing well, or that have regressed in their performance. Query Store provides detailed information such as wait stats that you need to resolve root causes, and it allows you to force the use of a known good execution plan. With SQL Server 2017 and later you can automate the correction of regressions in performance.
Query Store for SQL Server 2019helps you protect your database’s performance during upgrades of applications or version of SQL Server. The book provides fundamental information on how Query Store works and best practices for implementation and use. You will learn to run and interpret built-in reports, configure automatic plan correction, and troubleshoot queries using Query Store when needed.Query Store for SQL Server 2019helps you master Query Store and bring value to your organization through consistent query execution times and automate correction of regressions.
What You’ll Learn
Apply best practices in implementing Query Store on production servers
Detect and correct regressions in query performance
Lower the risk of performance degradation following an upgrade
Use tools and techniques to get the most from Query Store
Automate regression correction and other uses of Query Store
Who This Book Is For
SQL Server developers and administrators responsible for query performance on SQL Server. Anyone responsible for identifying poorly performing queries will be able to use Query Store to find these queries and resolve the underlying issues.
Categories:
Computers – Hardware
Year:
2019
Publisher:
Apress
Language:
english
Pages:
230
ISBN 10:
1484250036
ISBN 13:
9781484250037
File:
92 MB 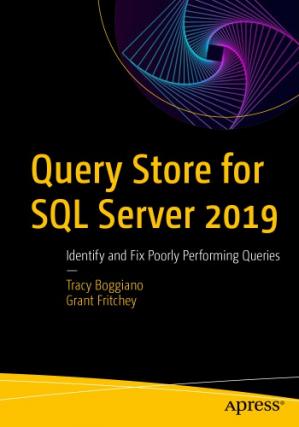