Quantum UnSpeakables II: Half a Century of Bell’s Theorem

Quantum [Un]Speakables II: Half a Century of Bell’s Theorem Bell, John S., Bertlmann, Reinhold A., Zeilinger, Anton (eds.)
This self-contained essay collection is published to commemorate half a century of Bell’s theorem. Like its much acclaimed predecessor “Quantum [Un]Speakables: From Bell to Quantum Information” (published 2002), it comprises essays by many of the worlds leading quantum physicists and philosophers. These revisit the foundations of quantum theory as well as elucidating the remarkable progress in quantum technologies achieved in the last couple of decades. Fundamental concepts such as entanglement, nonlocality and contextuality are described in an accessible manner and, alongside lively descriptions of the various theoretical and experimental approaches, the book also delivers interesting philosophical insights. The collection as a whole will serve as a broad introduction for students and newcomers as well as delighting the scientifically literate general reader Categories:
Computers – Hardware
Year:
2017
Edition:
1st ed.
Publisher:
Springer
Language:
english
Pages:
533 / 528
ISBN 10:
3319389874
ISBN 13:
9783319389875
Series:
The Frontiers Collection
File:
52 MB 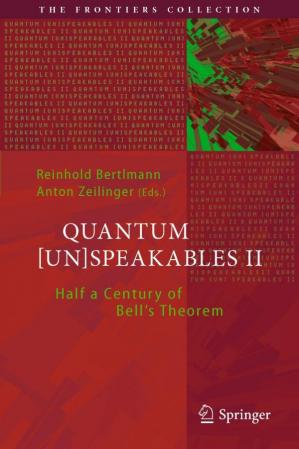 Quantum UnSpeakables II: Half a Century of Bell’s Theorem
$15.99