Providing Sound Foundations for Cryptography: On the Work of Shafi Goldwasser and Silvio Micali

Providing Sound Foundations for Cryptography: On the Work of Shafi Goldwasser and Silvio Micali Oded Goldreich
A cryptographic scheme is constructed so as to maintain a desired functionality, even under malicious attempts aimed at making it deviate from its prescribed behavior. The design of cryptographic systems must be based on firm foundations, whereas ad hoc approaches and heuristics are a very dangerous way to go. These foundations were developed mostly in the 1980s, in works that are all co-authored by Shafi Goldwasser and/or Silvio Micali. These works have transformed cryptography from an engineering discipline, lacking sound theoretical foundations, into a scientific field possessing a well-founded theory, which influences practice as well as contributes to other areas of theoretical computer science.
This book celebrates these works, which were the basis for bestowing the 2012 A.M. Turing Award upon Shafi Goldwasser and Silvio Micali. A significant portion of this book reproduces some of these works, and another portion consists of scientific perspectives by some of their former students. The highlight of the book is provided by a few chapters that allow the readers to meet Shafi and Silvio in person. These include interviews with them, their biographies and their Turing Award lectures. Categories:
Computers – Security
Year:
2019
Publisher:
Morgan & Claypool
Language:
english
Pages:
836 / 839
ISBN 10:
145037266X
Series:
ACM Books #30
File:
74 MB 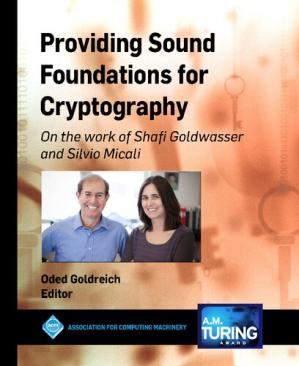 Providing Sound Foundations for Cryptography: On the Work of Shafi Goldwasser and Silvio Micali
$15.99