Program the Internet of Things with Swift for iOS: Learn how to program apps for the Internet of Things Ahmed Bakir, Manny de la Torriente, Gheorghe Chesler
Program the Internet of Things with Swift and iOS is a detailed tutorial that will teach you how to build apps using Apple’s native APIs for the Internet of Things, including the Apple Watch, HomeKit, and Apple Pay. This is the second book by Ahmed Bakir (author of Beginning iOS Media App Development) and his team at devAtelier LLC, who have been involved in developing over 20 mobile projects. Written like a code review, this book presents a detailed “how” and “why” for each topic, explaining Apple-specific design patterns as they come up and pulling lessons from other popular apps. To help you getting up and running quickly, each chapter is framed within a working project, allowing you to use the sample code directly in your apps. The Internet of Things is not limited to Apple devices alone, so this book also explains how to interface with popular third-party hardware devices, such as the Fitbit and Raspberry Pi, and generic interfaces, like Restful API’s and HTTPS. The Internet of Things is waiting — be a part of it! Categories:
Computers – Hardware
Year:
2015
Publisher:
Apress
Language:
english
Pages:
524 / 509
ISBN 10:
1484211952
ISBN 13:
9781484211953
File:
122 MB 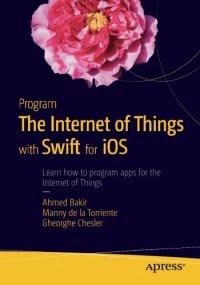