Practical Ansible: Configuration Management from Start to Finish – 2nd Vincent Sesto
Get ready to go from the basics of using Ansible to becoming proficient at implementing configuration management in your projects. This book begins with the basics of Ansible, providing you with details on how to install and configure your environment while working with different Ansible modules from the command line. Next, it introduces you to working with Ansible tasks and organizing configuration code into playbooks.
You’ll then learn how to extend playbooks further, using roles and templates within the configuration code. Author Vincent Sesto then extends your knowledge further by covering custom Ansible modules using Python and Linux shell scripts and demonstrating how you can start to keep your secret values encrypted and secure using Ansible Vault. You’ll also develop Ansible roles with the use of Ansible Galaxy to reuse existing roles that others have created.
This updated edition reflects changes added in the latest version of Ansible (9). It also includes an expanded chapter on testing Ansible using Molecule and managing large server environments using applications like Ansible Tower.
You will:
• Understand what Ansible is and how to install and run your first basic command line commands
• Expand your configuration management using Ansible playbooks, roles and templates
• Customize your code further using Ansible Vault and third-party roles in Ansible Galaxy.
• Work with Ansible in managing cloud infrastructure, specifically in Amazon Web Services
• Troubleshoot your Ansible code and use frameworks like Molecule and Testinfra to help test your code changes
• Manage large server environments using real-world examples and extend your configurations using an application like Ansible Tower
Who This Book Is For
Systems Engineers, Developers, DevOps Engineers and Software Administrators. Categories:
Computers – Applications & Software
Year:
2022
Edition:
2
Publisher:
Apress
Language:
english
Pages:
341
ISBN 10:
1484286421
ISBN 13:
9781484286425
File:
88 MB 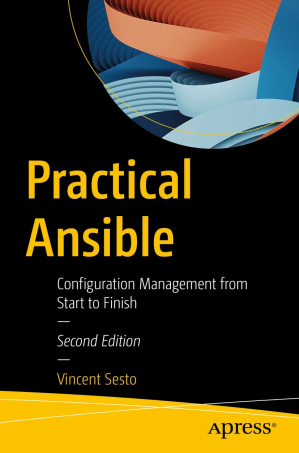