Patterns of Contemplation: Ibn ‘Arabi, Abdullah Bosnevi and the Blessing-Prayer of Effusion

Patterns of Contemplation is a uniquely innovative and comprehensive introduction to the sacred principles and symbolism of geometry, letters and numbers, discussed through the first in-depth analysis and English translation of a major Sufi devotional masterpiece, The Blessing-Prayer of Effusion (al-Ṣalāt al-fayḍiyya). This special type of prayer, invoking God’s blessings upon the Prophet Muhammad, which is well known throughout the Islamic world, seems to have first become popular in the Maghrib (West) from the time of Ibn ʿArabi (d. 1240) onwards. Pablo Beneito and Stephen Hirtenstein provide the first critical edition of the Arabic text and English/Spanish translation of The Blessing-Prayer of Effusion, along with a fully annotated commentary, transliteration and recording. Although this well-known short prayer has been attributed since the 18th century to Ibn ʿArabi, the authors argue persuasively that it was actually written by Abdullah Bosnevi (d. 1644), a major Ottoman follower of the school of Ibn ʿArabi who originated from Bosnia. Also included is a brief introduction to the genre of blessing-prayer and one of its earliest examples in Arabic and English, The Prayer of Blessing attributed to ʿAbd al-ʿAziz al-Mahdawi (d. 1224), Ibn ʿArabi’s friend and mentor in Tunis (to whom he addressed his famous Futūḥāt al-Makkiyya). Over five substantial introductory chapters and five appendices which surround the text of The Blessing-Prayer of Effusion, Pablo Beneito and Stephen Hirtenstein carefully uncover the extraordinarily rich meanings, kaleidoscopic structure, rhymes and symbolism that it contains, and show how they are interwoven in a majestically beautiful architecture of mysticism and poetry. This is not only a prayer for recitation but an embodied invitation to the most profound contemplations on the nature of the Truly Human Being (al-insān al-kāmil). Categories:
Religion – Spirituality
Year:
2021
Publisher:
Anqa Publishing
Language:
english
Pages:
312 / 310
ISBN 10:
1905937709
ISBN 13:
9781905937707
File:
16.50 MB 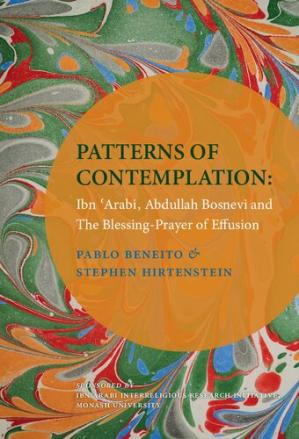 Patterns of Contemplation: Ibn ‘Arabi, Abdullah Bosnevi and the Blessing-Prayer of Effusion
$9.99