Oriental Adventures David Cook
Dungeon Masters and players: prepare yourselves to enter a whole new world-the world of Oriental Adventures!
The material in this book will enable you to play the AD&D game as you’ve never played it before. In the lands of Oriental Adventures, characters are not judged solely on their prowess with sword and spell. Oriental characters’ social skills and personal honor are just as important as their combat abilities. When was the last time politeness and proper manners really mattered in your campaign? How can characters associate with nobility if they know nothing of courts or court etiquette? How many AD&D characters worry about how their actions reflect upon their families and comrades? These and many other intricacies of social interactions and responsibilities are brought to light in this volume. Don’t get the idea that Oriental Adventures characters don’t fight. Pages and pages of Oriental weapons and armor are described and illustrated here. From the favored weapons of the ninja to thin pieces of cloth that actually stop arrows, the arms and defenses of the Orient are yours in the lands of Kara-Tur. Have a favorite monster from Japanese films? Find it under Gargantua in the Monsters section! Want to learn a martial arts style or create a new style? You can do it in the new worlds opened up to you in Oriental Adventures!
Product History
Oriental Adventures (1985), by David “Zeb” Cook, is TSR’s eighth hardcover for the AD&D game. It was released in October 198 This marked the first time ever that TSR released two hardcover books in a single year, following from Unearthed Arcana (1985). They’d keep up the two-a-year rate through 198 Categories:
Computers – PC & Video Games
Year:
1985
Publisher:
Wizards of the Coast
Language:
english
Pages:
145
ISBN 10:
0880380993
ISBN 13:
9780880380997
Series:
AD&D 1e
File:
363 MB 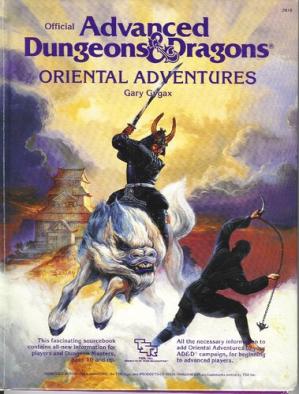