Ninja Hacking: Unconventional Penetration Testing Tactics and Techniques Thomas Wilhelm, Jason Andress
Ever thought of using the time-tested tactics and techniques of the ancient ninja to understand the mind of today’s ninja, the hacker? As a penetration tester or security consultant you no doubt perform tests both externally and internally for your clients that include both physical and technical tests. Throw traditional pen testing methods out the window for now and see how thinking and acting like a ninja can actually grant you quicker and more complete access to a company’s assets. Get in before the hacker does with these unorthodox techniques. Use all of the tools that the ninja has: disguise, espionage, stealth, and concealment. Learn how to benefit from these tools by laying your plans, impersonating employees, infiltrating via alarm system evasion, discovering weak points and timing, spyware and keylogging software, and log manipulation and logic bombs. And, really, don’t you want to be a ninja for a day just because they’re cool? Let this book be your excuse!Discusses techniques used by malicious attackers in real-world situationsDetails unorthodox penetration testing techniques by getting inside the mind of a ninjaExpands upon current penetration testing methodologies including new tactics for hardware and physical attacks Categories:
Computers – Computer Business & Culture
Year:
2010
Edition:
1
Publisher:
Syngress
Language:
english
Pages:
376 / 314
ISBN 10:
1597495883
ISBN 13:
9781597495882
File:
67 MB 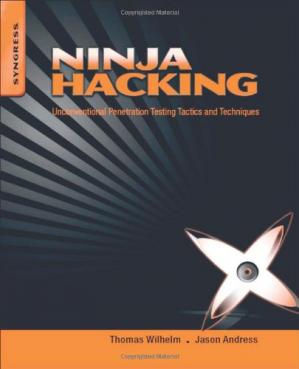