Lestrade and the Sign of Nine M. J. Trow
Book two in the Inspector Lestrade series.
It was a puzzle that faced Scotland Yard from its very begin-ning – whose was the limbless body found among the foundations? And in the murderous world of Sholto Lestrade, one question is invariably followed by another – what do a lecherous rector, a devious speculator and a plagiaristic novel-ist have in common? Answer: they’re all dead, each of them with a bloody space where his skull used to be. And six others are to join them before our intrepid inspector brings the per-petrator to book.
But 1886 was a bad year for the Metropolitan Police. The People of the Abyss have heard the whisper and the spectre of Communism haunts the land. There is a new Commissioner, a regular martinet, at the Yard. And then, there is that very odd couple, sometime of Baker Street …
Lestrade braves haunted houses, machine-gun bullets and two Home Secretaries in his headlong hunt for the truth. And at last, this is… 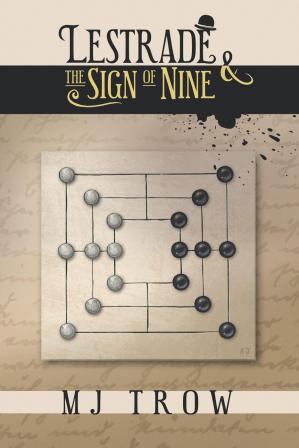