Learning Angular: A no-nonsense beginner’s guide to building web applications with Angular 10 and TypeScript Aristeidis Bampakos, Pablo Deeleman
Uncover Angular’s potential for creating enterprise web applications―from setting up the environment to deployment―with the help of expert guidance, step-by-step explanations, and hands-on exercisesKey FeaturesLearn the fundamentals of Angular to build web applications using TypeScriptExplore the basics of Angular development, from components and templates to forms and servicesDiscover best practices for building, packaging, and testing Angular applicationsBook DescriptionAngular, loved by millions of web developers around the world, continues to be one of the top JavaScript frameworks thanks to its regular updates and new features that enable fast, cross-platform, and secure frontend web development. With Angular, you can achieve high performance using the latest web techniques and extensive integration with web tools and integrated development environments (IDEs).Updated to Angular 10, this third edition of the Learning Angular book covers new features and modern web development practices to address the current frontend web development landscape. If you are new to Angular, this book will give you a comprehensive introduction to help you get you up and running in no time. You’ll learn how to develop apps by harnessing the power of the Angular command-line interface (CLI), write unit tests, style your apps by following the Material Design guidelines, and finally deploy them to a hosting provider. The book is especially useful for beginners to get to grips with the bare bones of the framework needed to start developing Angular apps.By the end of this book, you’ll not only be able to create Angular applications with TypeScript from scratch but also enhance your coding skills with best practices.What you will learnUse the Angular CLI to scaffold, build, and deploy a new Angular applicationBuild components, the basic building blocks of an Angular applicationDiscover techniques to make Angular components interact with each otherUnderstand the different types of templates supported by AngularCreate HTTP data services to access APIs and provide data to componentsEnhance your application’s UX with Angular MaterialApply best practices and coding conventions to your large-scale web development projectsWho this book is forThe Angular TypeScript book is for JavaScript and full-stack developers who want to enter the world of frontend development with Angular or migrate to the Angular framework to build professional web applications. Familiarity with web and programming concepts will assist with understanding the content covered in the book.Table of ContentsBuilding Your First Angular AppIntroduction to TypeScriptComponent Interaction and Inter-CommunicationEnhance components with Pipes and DirectivesStructure an Angular AppEnrich Components with Asynchronous Data ServicesNavigate through Components with RoutingOrchestrating Validation Experiences in FormsIntroduction to Angular MaterialGive motion to components with animationsUnit test an Angular AppBringing an Angular App to ProductionDevelop a Real-World Angular App Categories:
Computers – Web Development
Year:
2020
Edition:
3rd Revised
Publisher:
Packt Publishing
Language:
english
Pages:
430
ISBN 10:
1839210664
ISBN 13:
9781839210662
File:
51 MB 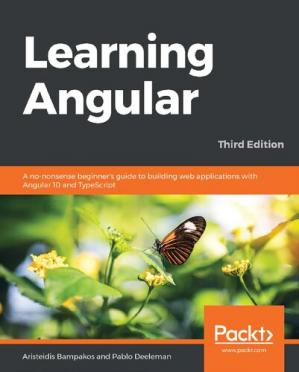