Learn Robotics Programming: Build and control AI-enabled autonomous robots using the Raspberry Pi and Python Danny Staple
Develop an extendable smart robot capable of performing a complex series of actions with Python and Raspberry Pi
Key Features
Get up to speed with the fundamentals of robotic programming and build intelligent robots
Learn how to program a voice agent to control and interact with your robot’s behavior
Enable your robot to see its environment and avoid barriers using sensors
Book Description
We live in an age where the most complex or repetitive tasks are automated. Smart robots have the potential to revolutionize how we perform all kinds of tasks with high accuracy and efficiency. With this second edition of Learn Robotics Programming, you’ll see how a combination of the Raspberry Pi and Python can be a great starting point for robot programming.
The book starts by introducing you to the basic structure of a robot and shows you how to design, build, and program it. As you make your way through the book, you’ll add different outputs and sensors, learn robot building skills, and write code to add autonomous behavior using sensors and a camera. You’ll also be able to upgrade your robot with Wi-Fi connectivity to control it using a smartphone. Finally, you’ll understand how you can apply the skills that you’ve learned to visualize, lay out, build, and code your future robot building projects.
By the end of this book, you’ll have built an interesting robot that can perform basic artificial intelligence operations and be well versed in programming robots and creating complex robotics projects using what you’ve learned.
What you will learn
Leverage the features of the Raspberry Pi OS
Discover how to configure a Raspberry Pi to build an AI-enabled robot
Interface motors and sensors with a Raspberry Pi
Code your robot to develop engaging and intelligent robot behavior
Explore AI behavior such as speech recognition and visual processing
Find out how you can control AI robots with a mobile phone over Wi-Fi
Understand how to choose the right parts and assemble your robot
Who this book is for
This second edition of Learn Robotics Programming is for programmers, developers, and robotics enthusiasts who want to develop a fully functional robot and leverage AI to build interactive robots. Basic knowledge of the Python programming language will help you understand the concepts covered in this robot programming book more effectively.
Table of Contents
Introduction to Robotics
Exploring Robot Building Blocks – Code and Electronics
Introducing the Raspberry Pi – Starting with Raspbian
Preparing a Raspberry Pi for a Robot – Headless by Default
Protecting Robot Code with Git and SD Card Copies
Building Robot Basics – Wheels, Power, and Wiring
Moving Motors with Python
Programming Distance Sensors with Python
Programming RGB Strips in Python
Using Python to Control Servo Motors
Programming Encoders with Python
IMU Programming with Python
Robot Vision – Using a Pi Camera and OpenCV
Line Following With A Camera with Python
Voice Communication with a Robot Using Mycroft
Diving Deeper with the IMU
Controlling the Robot With A Phone and Python
Taking Your Robot Programming Skills Further
Planning Your Next Robot Project – Putting It All Together Categories:
Computers – Hardware
Year:
2021
Edition:
2
Publisher:
Packt Publishing
Language:
english
Pages:
602
ISBN 10:
1839218800
ISBN 13:
9781839218804
File:
105 MB 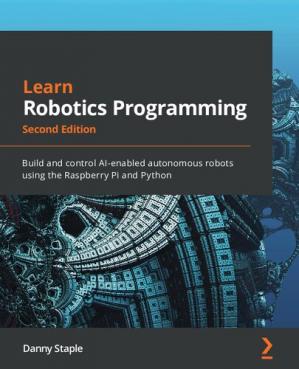