Foreigners often say that English language is “easy.” A language like Spanish is challenging in its variety of verb endings (the verb speak is conjugated hablo, hablas, hablamos), and gender for nouns, whereas English is more straight forward (I speak, you speak, we speak). But linguists generally swat down claims that certain languages are “easier” than others, since it is assumed all languages are complex to the same degree. For example, they will point to English’s use of the word “do” — Do you know French? This usage is counter-intuitive and difficult for non-native speakers. Linguist John McWhorter agrees that all languages are complex, but questions whether or not they are all equally complex. The topic of complexity has become a hot issue in recent years, particularly in creole studies, historical linguistics, and language contact. As McWhorter describes, when languages came into contact over the years (when French speakers ruled the English for a few centuries, or the vikings invaded England), a large number of speakers are forced to learn a new language quickly, and this came up with a simplified version, a pidgin. When this ultimately turns into a “real” language, a creole, the result is still simpler and less complex than a “non-interrupted” language that has been around for a long time. McWhorter makes the case that this kind of simplification happens in degrees, and criticizes linguists who are reluctant to say that, for example, English is simply simpler than Spanish for socio-historical reasons. He analyzes how various languages that seem simple but are not creoles, actually are simpler than they would be if they had not been broken down by large numbers of adult learners. In addition to English, he looks at Mandarin Chinese, Persian, Malay, and some Arabic varieties. His work will interest not just experts in creole studies and historical linguistics, but the wider community interested in language complexity.
Categories:
Languages – Grammar, dictionaries & phrasebooks
Year:
2007
Publisher:
Oxford University Press, USA
Language:
english
Pages:
304 / 332
ISBN 10:
1435619722
ISBN 13:
9781435619722
File:
79 MB 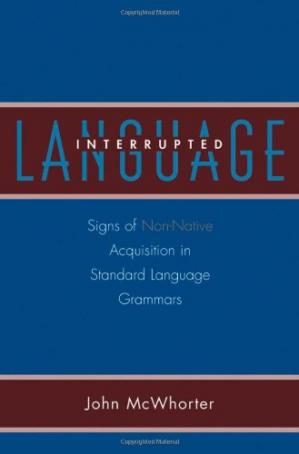