Language from the Body: Iconicity and Metaphor in American Sign Language

Language from the Body: Iconicity and Metaphor in American Sign Language Sarah F. Taub
What is the role of meaning in linguistic theory? Generative linguists have severely limited its influence while cognitivist and functionalist linguists believe that meaning pervades and motivates all levels of linguistic structure. This dispute can now be resolved conclusively by evidence from signed language. Language from the Body rebuts the generativist linguistic theories that separate form and meaning and asserts that iconicity can only be described in a cognitivist framework where meaning can influence form. Categories:
Reference
Year:
2001
Edition:
1
Publisher:
Cambridge University Press
Language:
english
Pages:
276
ISBN 10:
0521770629
ISBN 13:
9780511034138
File:
177 MB 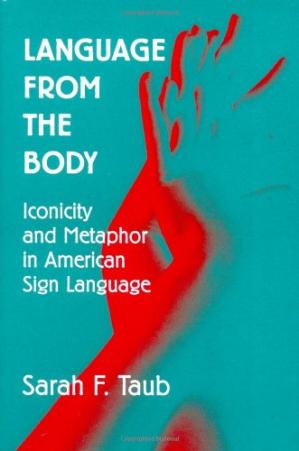 Language from the Body: Iconicity and Metaphor in American Sign Language
$9.99