It Happened on Tinder: Reflections and Studies on Internet-Infused Dating

It Happened on Tinder: Reflections and Studies on Internet-Infused Dating Amir Hetsroni, Meriç Tuncez
This volume brings together articles from different parts of the globe that describe, question, test and criticize innovations and recent developments in online dating. Using quantitative as well as qualitative techniques the studies included in the book examine the impact of gender, personality traits, app interface and design, and culture on success and failure in online courtship. Among the issues dealt here are ghosting, sex emoticons, body presentation in the virtual universe, dime dating, religious courtship and more. Amir Hetsroni is a professor in the Department of Media and Visual Arts at Koç University in Turkey. He is the author/editor of four books and nearly 100 journal articles and book chapters. He is also a media celebrity in his home country, Israel, where he takes part in reality shows as a consultant and commentator, and takes an active role in anti-censorship campaigns. He failed to find love in online dating, but did not lose hope.
Meriç Tuncez, a PhD candidate in Design, Technology, Society program at Koç University, received his BA in Business Administration from Koç University, and received his M.F.A. in Media and Design from Bilkent University. His research interests span interactions with artificial intelligence and virtual assistants including humanness, mental state, emotion, intention, sociality and morality attributions to artificial intelligence, and online dating. He is also a digital artist and his artworks were included in a recent interdisciplinary exhibition about coincidences called Yaratan Disiplinler: Tesadüfler by Tasarım Atölyesi Kadıköy (TAK) in Istanbul. His first real love was exclusively on the net but later he realized that he was being catfished by that person for the duration of a year Categories:
Computers – Computer Business & Culture
Year:
2019
Publisher:
Institute of Network Cultures, Amsterdam
Language:
english
Pages:
219
ISBN 10:
9492302446
ISBN 13:
9789492302441
File:
45 MB 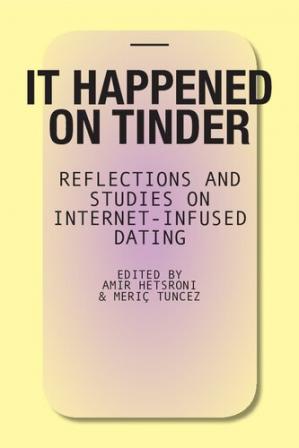 It Happened on Tinder: Reflections and Studies on Internet-Infused Dating
$15.99