Hands-On Bitcoin Programming with Python: Build powerful online payment centric applications with Python Harish Kumar Garg
Simplified Python programming for Bitcoin and blockchainKey FeaturesBuild Bitcoin applications in Python with the help of simple examplesMine Bitcoins, program Bitcoin-enabled APIs and transaction graphs, and build trading botsAnalyze Bitcoin transactions and produce visualizations using Python data analysis toolsBook DescriptionBitcoin is a cryptocurrency that’s changing the face of online payments. Hands-On Bitcoin Programming with Python teaches you to build software applications for mining and creating Bitcoins using Python.This book starts with the basics of both Bitcoin and blockchain and gives you an overview of these inherent concepts by showing you how to build Bitcoin-driven applications with Python. Packed with clear instructions and practical examples, you will learn to understand simple Python coding examples that work with this cryptocurrency.By the end of the book, you’ll be able to mine Bitcoins, accept Bitcoin payments on the app, and work with the basics of blockchain technology to create simply distributed ledgers.What you will learnMaster the Bitcoin APIs in Python to manipulate Bitcoin from your Python appsBuild your own Bitcoin trading bots to buy Bitcoins at a lower price and sell them at a higher priceWrite scripts to process Bitcoin payments through a website or appDevelop software for Bitcoin mining to create Bitcoin currency on your own computer hardwareCreate your own keys, addresses, and wallets in Python codeWrite software to analyze Bitcoin transactions and produce reports, graphs, and other visualizationsWho this book is forHands-On Bitcoin Programming with Python consists of examples that will teach you to build your own Bitcoin application. You will learn to write scripts, build software for mining, and create Bitcoins using Python. Anyone with prior Python experience, who wants to explore Python Bitcoin programming and start building Bitcoin-driven Python apps, will find this book useful.Table of ContentsGetting started with BitcoinProgramming Bitcoin and Blockchain with PythonEarning Bitcoin programmaticallyBitcoin Data Analysis Categories:
Computers – Web Development
Year:
2018
Publisher:
Packt Publishing
Language:
english
Pages:
9 113
ISBN 10:
1789537002
ISBN 13:
9781789537000
File:
76 MB 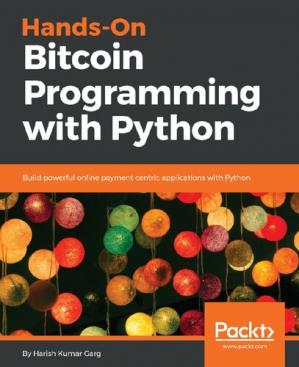