God No!: Signs You May Already Be an Atheist and Other Magical Tales

God, No!: Signs You May Already Be an Atheist and Other Magical Tales Penn Jillette
Not only can the man rant, he can write. From the larger, louder half of the world-famous magic duo Penn & Teller comes a scathingly funny reinterpretation of The Ten Commandments. They are The Penn Commandments, and they reveal one outrageous and opinionated atheist’s experience in the world. In this rollicking yet honest account of a godless existence, Penn takes readers on a roller coaster of exploration and flips conventional religious wisdom on its ear to reveal that doubt, skepticism, and wonder — all signs of a general feeling of disbelief — are to be celebrated and cherished, rather than suppressed. And he tells some pretty damn funny stories along the way. From performing blockbuster shows on the Vegas Strip to the adventures of fatherhood, from an on-going dialogue with proselytizers of the Christian Right to the joys of sex while scuba diving, Jillette’s self-created Decalogue invites his reader on a journey of discovery that is equal parts wise and wisecracking.Praise for God, No!”People who say that libertarians have no heart or atheists have no soul need to read this book. Because Penn Jillette has a lot of both.” — MATT STONE and TREY PARKER, creators of South Park and the award-winning Broadway musical The Book of Mormon”There are few people in the country who question more boldly, brashly, and bravely than my friend Penn Jillette. This book is funny, provocative, and profane. But is it right? God, no!” –GLENN BECK”This planet has yielded exactly one mutual friend for Glenn Beck and me and that friend has written a brilliant book called God, No! Penn reveals ‘the big secret of magic,’ tells you why tattoos are perfect expressions of atheism and exactly what to eat when you know you’re going to vomit later.” –LAWRENCE O’DONNELL”Penn Jillette is a twenty-first-century Lord of Misrule: big, boisterously anarchic, funny, Rabelaisian, impossible and unique. There isn’t–couldn’t be–better not be–anybody like him.”  –RICHARD DAWKINS, bestselling author of The Greatest Show on Earth and The God Delusion
Categories:
Fiction – Humour
Year:
2011
Edition:
First Edition
Publisher:
Simon & Schuster
Language:
english
ISBN 10:
1451610386
ISBN 13:
9781451610383
File:
13 MB 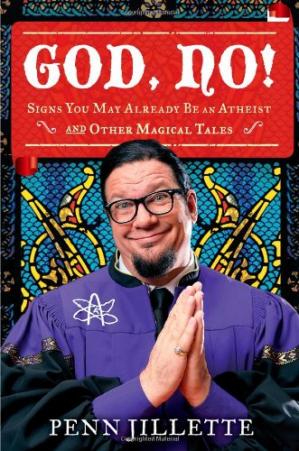 God No!: Signs You May Already Be an Atheist and Other Magical Tales
$9.99