Genetics, Disability, and Deafness John Vickrey Van Cleve (ed)
Drawn from the Genetics, Disability and Deafness Conference at Gallaudet University in 2003, this trenchant volume brings together 13 essays from science, history, and the humanities, history and the present, to show the many ways that disability, deafness, and the new genetics interact and what that interaction means for society. Pulitzer-prize-winning author Louis Menand begins this volume by expressing the position shared by most authors in this wide-ranging forum—the belief in the value of human diversity and skepticism of actions that could eliminate it through modification of the human genome. Nora Groce creates an interpretive framework for discussing the relationship between culture and disability.
From the historical perspective, Brian H. Greenwald comments upon the real “toll” taken by A. G. Bell’s insistence upon oralism, and Joseph J. Murray recounts the 19th century debate over whether deaf-deaf marriages should be encouraged. John S. Schuchman’s chilling account of deafness and eugenics in the Nazi era adds wrenching reinforcement to the impetus to include disabled people in genetics debates.
Mark Willis illustrates the complexity of genetic alterations through his reaction to his own genetic makeup, in that he is happy to combat his heart disease with genetic tools but refuses to participate in studies about his blindness, which he considers a rich variation in human experience. Anna Middleton describes widely reported examples of couples attempting to use genetic knowledge and technology both to select for and against a gene that causes deafness.
Chapters by Orit Dagan, Karen B. Avraham, Kathleen S. Arnos, and Arti Pandya elucidate the promise of current research to clarify the complexity and choices presented by breakthroughs in genetic engineering. In his essay on the epidemiology of inherited deafness, geneticist Walter E. Nance emphasizes the importance of science in offering individuals knowledge from which they can fashion their own decisions. Christopher Krentz reviews past and contemporary fictional accounts of human alteration that raise moral questions about the ever-continuing search for human perfection. Michael Bérubé concludes this extraordinary collection with his forceful argument that disability should be considered democratically in this era of new genetics to ensure the full participation of disabled people themselves in all decisions that might affect them.
Categories:
Biology and other natural sciences
Year:
2004
Publisher:
Gallaudet University Press
Language:
english
Pages:
250
ISBN 10:
1563683075
ISBN 13:
9781563683077
File:
18.67 MB 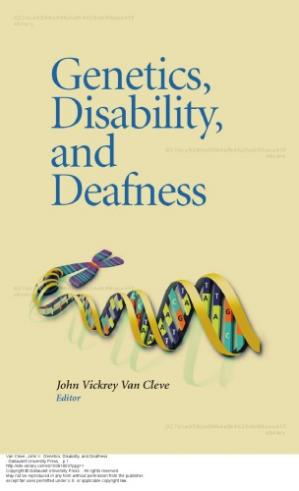