COLLEGE ALGEBRA, VOLUME 1: Fundamental Principles, Techniques and Theorems (THE COLLEGE ALGEBRA SERIES) , , , , This book was written to provide an essential assistance to students who are first being introduced to the fundamentals of Algebra and has been designed to be an excellent supplementary textbook for University and College students in all areas of Mathematics, Physics and Engineering. The content of the book is divided into 9 chapters.In Chapter 1 we present the fundamentals of the theory of Sets, i.e. union, intersection and difference of sets, properties of the operations between sets, a general method to prove a set equality, Venn’s diagrams, ordered pairs and Cartesian products.In Chapter 2 we concentrate on the set of real numbers, define rational and irrational numbers, introduce the countable and the uncountable sets concept, show that the set of rational numbers is countable while the set of real numbers is uncountable, and state various other theorems concerning finite and infinite sets.In Chapter 3 we study the powers with positive or negative integer exponents, the radicals, and state some fundamental properties governing the operations with algebraic expressions involving powers and/ or radicals. Finally we show that a power with a fractional exponent is equivalent to a radical, and state all important properties involving powers with fractional exponents.In Chapter 4 we study some (frequently used in Algebra) properties of proportions and state the important Theorem of equal fractions.In Chapter 5 we present a thorough and in depth introduction to the theory of inequalities and state their most common properties. Simple inequalities are solved making use of the related inequality properties.In Chapter 6 we define the absolute value of a real number, state all the fundamental related properties and give some general principles as how to work with problems involving absolute values.In Chapter 7 we present an in depth study of the main algebraic identities, such as the square of the sum or the difference of two numbers, the cube of the sum or the difference of two numbers, the difference of two squares, the difference or the sum of two cubes, the Cauchy’s identity, the Lagrange’s identity, the De Moivre’s identity, the Newton’s Binomial Formula, etc.In Chapter 8 various methods and techniques are developed, in order to factor a given algebraic expression, such as common factors, factoring by grouping, the difference of two squares or two cubes, the sum of two cubes, the difference of like powers of two numbers, etc. The factoring of an algebraic expression relies heavily on the identities developed in chapter In Chapter 9 we present some useful permanent inequalities, with a wide range of applications in various Algebra problems. In this chapter we also study the famous Cauchy’s inequality about the arithmetic mean, the geometric mean and the harmonic mean of n positive numbers, and work various problems with the aid of this important inequality.The text includes more than 145 illustrative worked out examples and 300 graded problems to be solved. The examples and the problems are designed to help the students to develop a solid background in Algebra, to broaden their knowledge and sharpen their analytical skills and finally to prepare them to pursue successful studies in more advanced courses in Mathematics.A brief hint or a detailed outline in solving more involved problems is often given.Finally answers to odd-numbered problems are also provided so that the students can check their progress and understanding of the material studied.
Categories:
Mathematics – Algebra
Year:
2017
Language:
english
Pages:
190
ISBN:
B075BB1C3Z
File:
03 MB 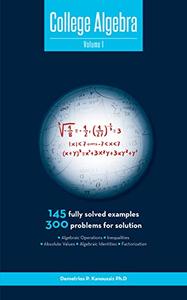