Birth of the Shinkansen: The Origin Story of the World-First Bullet Train

Birth of the Shinkansen: The Origin Story of the World-First Bullet Train Tetsuo Shimomae
This book discusses the Shinkansen, the world’s first high-speed railway, which was born in Japan in 1964 and how it has developed up to the present day. In the 1950s, some European railways were trying to increase the commercial operating speed up to 160 km/h, and it was considered difficult to raise it to 200 km/h. Japanese engineers with excellent engineering ability post World War ll moved from the military to the railways to overcome the technological challenges realizing the high-speed railways using new approaches. The book discusses the technological barriers in speeding up the railway at that time and how these engineers overcame them in non-computer days. In the five decades since the Shinkansen began operating, there have been significant developments enabling high-speed, safe, and frequent train operation with high punctuality while conserving the environment. The book also describes today’s highly evolved Shinkansen. The Shinkansen, which runs 440,000 km a day, has carried 13 billion people without a single fatality in 56 years. The book overviews factors that contributed to the Shinkansen’s high safety record. This book is an excellent guide for those interested in the history of the world’s first high-speed railway. Categories:
Engineering – Electrical & Electronic Engineering
Year:
2022
Publisher:
Springer
Language:
english
Pages:
308
ISBN 10:
9811665370
ISBN 13:
9789811665370
File:
188 MB

Be the first to review “Birth of the Shinkansen: The Origin Story of the World-First Bullet Train” Cancel reply 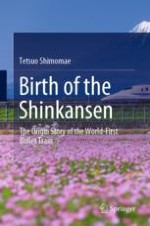 Birth of the Shinkansen: The Origin Story of the World-First Bullet Train
$9.99