Beginner’s Danish Nete Schmidt
This title includes a book & 2 CDs. The smallest of the Scandinavian countries, Denmark is made up of a peninsula (Jutland) attached to northern Germany, and a collection of islands known as the Danish Archipelago. Modern spoken Danish has gained a reputation as being exceptional and difficult for foreigners to understand and master. The nine Danish vowels represent sixteen different sounds and most of the consonants are unvoiced. A unique feature is the ‘stod’, the glottal stop, used to distinguish between several homonyms and words. The Danes also tend to drop inflectional endings, and this perceived mumbling, even in formal standard Danish, may present problems to those learning the language. The audio CDs emphasise pronunciation and address these issues in a series of engaging exercises on greetings, family, athletics, dining, illness, holidays and celebrations. Perfect for both classroom and independent students, the book also contains lessons on grammar, a glossary of vocabulary words, and a thorough introduction to Danish history and culture. Categories:
Languages – General & Miscellaneous Languages – Reference
Year:
2007
Edition:
Pap/Com
Publisher:
Hippocrene Books
Language:
danish
Pages:
352 / 355
ISBN 10:
0781811996
ISBN 13:
9780781811996
File:
358 MB 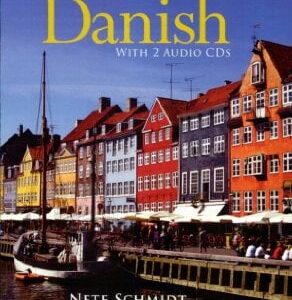